Can I change my LED rope light controller

I have installed 50m Duralite LED rope along my drive. I bought the multi-function controller thinking it would remember my choice so it would be a nice light normally, but could flash at Xmas... nope.

They sell both multi-function and basic controllers on TLC Direct:

But my issue is I have had to extend the power cable by cutting between the box and the 3-pin fitting for the rope light. The standard controller has 3 wires coming out: brown, blue and green/yellow. The multi-function has 3 wires: brown, blue.... and brown! I have no idea in either case which wire goes to which pin as it's concealed, short of destroying the thing to find out.

It worked perfectly with the multi-F controller, but I cannot get the simple one to work and trying every combination sounds like a bad idea. I did discover that which way round the two browns went affected the order of functions on the multi-F which sounds like it gives a clue but I have no idea how they get the multi-function to work with just 3 wires to figure it out.

I can't find a wiring diagram for Duralite LED ropelights, so when I found this thread I hoped someone was going to answer, but the OP found themself a replacement power supply. It must be simple but a)it's mains b)it's £200 of ropelight plugged in so I don't want to risk killing the kit or myself!

Here's what the 2 controllers look like - I taped the 2nd brown with black tape but it doesn't tell you much Does anyone know, or know how to figure out, the mapping between them? I don't think the earth is doing anything in the simple one? 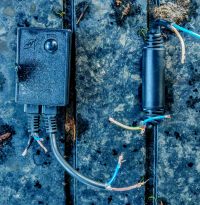 Your post has been split. Adding your question to another persons (10 year old) post causes confusion
Last edited by a moderator: Mar 23, 2022
M

By the way what is inside the simple power supply? These are mains lights so could it be something to limit the draw, or do smoothing? It's about the size of a tube of Polos so can't be much going on?

The problem if you will, is that there are multiple ways of making LED's flash, and then there are multiple configurations of LED "strings" (Say 5 in series, but in parallel with the next 5 etc, and another set with 2 parallel which are in series with the 2 adjacent and so on) So when you have a set of lights fail, they are NOT designed to be replaced/repaired and as configurations of one set is NOT the same as another set (So you can't mix and match) the only option is to throw them away.

For next year I suggest you may now want to look at "Pixels", again these can not be changed, but are so versatile. I do not supply them, I just happen to like them.

Oh, the round tube? That is a capactive dropper.

Just an FYI the control units and mains to low voltage power supply (may be on one box or separate) are really best best not swapped as the markings on the units are rarely that useful.

The strings with alternate and flashing patterns do this by outputting DC in one polarity to light one set of LED's in the string and the opposite polarity to activate the second set. The 'DC' is pulsed to provide brightness steps for fades etc and rapidly alternated to light all the LEDs as far as the eye sees.

All very clever - however the combined supply+controller I looked at recently had it's output simply described as 31V DC Which it never is as far as I could see !

Richard-the-ninth said:
Oh, the round tube? That is a capactive dropper.
Click to expand...

Was that to me @Richard-the-ninth ? I got this figured out over the weekend - the weird part was that in the static controller 'earth' goes to the same pin as blue in the MF one, which was about the only option I didn't consider.

I did a continuity test on the simple controller to check it worked but got about 2MOhm through the 'lump' which was unexpected - these are 230V AC lights so I thought all that did was maybe a bit of smoothing.
Someone suggested elsewhere it was to prevent interference so it made me think, is there a way to have high resistance DC (multimeter) and low resistance AC? Or, to reduce the current could it simply be a 2MO resistor? My electronics knowledge is 20 years unused so I've forgotten most of what I ever knew.

Anyway in my case it all works and I know which pin does what on the Duralite products for future. If I need to make my own extensions or adapters I should be able to.