Very recently had a new bathroom fitted, decided to go for 2 sets of lighting,


Happy with the positions of the lights but they're both wayy too bright. Switch 1 is nuclear and Switch 2 is bright enough to light the entire room up without there being any places where the light doesnt touch, no shadows, no contrast.... so fails to be a mood lighting per sae.

Switch 1 - the extractor fan is on this switch too so assume I can't use a dimmer? So is the easiest solution here is just swap the lights for something much lower watt like 4w or so?

Switch 2 - is it possible and straight forward to make these 12v lights work with a dimmer switch? From memory the installer put a transformer between the cable and the light fitting to bring it down to low voltage. But as far as I can see on the box for the lights it doesnt say they're dimmable.

And apologies is this is really basic stuff.

2) It depends on the lamps and the "power supply" They have to be dimmable, most are not. Easiest option is as 1, change the lamps.
P

As it's a bathroom, do the downlights have to be the sealed variants where you can't swap the bulbs? Or can you get ones with interchangable Mr16/GU10 that are still ip65 rated?

If so, is there a 1w low voltage downlight out there?

You can get IP65 rated lights with interchangeable lamps, you can also get 1w LED MR16 lamps. Your choice.

Not sure if you realise.. but the "Watts".. is the power each lamp consumes... NOT how much light they output.

To get a more realistic idea of how much difference the light levels would be,
you need to be looking at the Lumens (Light), Kelvin (Colour temperature), and Beam Angle (how wide a beam the lamp casts)..

Watts is the wrong unit of measurement if assessing light levels..
My 2200watt kettle does not emit any light..
Nor do my 50watt loudspeakers on my hi-fi...

Although as a general rule more watts = more light..
You could have two 4watt LED's that give out quite different light levels....

e.g. an inefficient 4watt lamp could give out less light than a more efficient 3watt lamp..
ALSO.. Dimmable LED's tend to consume more power for the same light level than a non-dimmable equivalent..

I can't imagine you would be looking to have the equivalent of a bunch of 40w or 50w lamps in your ceiling..
more aiming to get similar to the sort of light from a group of 25watt candle lamps..?

Then further Kelvin increases will gradually be nearing daylight lamps..
(Daylight and/or sunlight will be around 5000 to 6000Kelvin.. whereas a candle would be nearer 2000Kelvin)..

Relying purely on the Watts can be a bit of a merry dance...
Hope that helps a bit?

I did take a look on the boxes for each of the set of lights but the lumen number I was looking for was different on each box, (one was luminous flux, the other was lumen per Watt) so wasn't entirely sure what the lumens were to be honest.

I'll attach the pictures as im sure that'll make more sense to you than I. 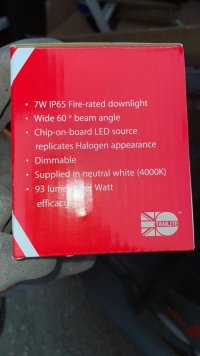 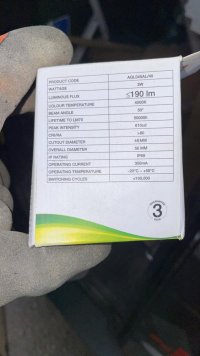 I'm ok with the colour temperature and maybe fine with the beam angle. It's just the brightness. I'm thinking I want to half the lumens of each of the zones typically.

So I guess for the low voltage ones if i've read the box right, i need the lights to be 100lumens each to half what is currently?

and for the 7w ones, Im not sure what lumens they are, just that they're 93 lumens per watt.

Firstly don't bother with integrated throw away lights - they are the work of the devil and are not as reliable as manufacturers make out!

I would suggest you go for downlights with changeable GU10 light bulbs then, when they fail, which they will , you can change them. As for dimming - this isn't easy , especially of you have a fan, so consider 2 "banks" of lights so you can have lower light levels or all together
P

Yes I think that is exactly what we've decided to do, forget about the dimmer and just swap everything out with interchangeable bulbs for each of the 2 zones.

Also for the alcoves in there, we're gonna swap the downlights out for those cool led strip ones that come in a sort of strip trunking with a transparent lens? That seems to be the way people are lighting alcoves/recesses now a days. Not sure what they're called though. 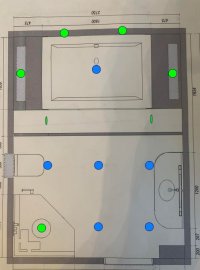 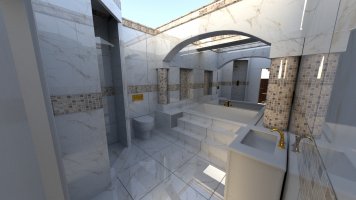 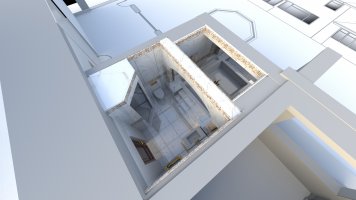