Just wondering if Apache as seen anything like this, it's not bothering her, we hadn't even noticed until now.

Will get her into the vet shortly to get it checked out, just wondering if it's something or nothing as it were. 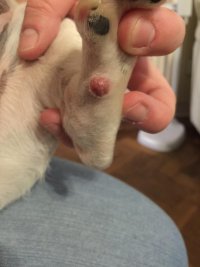 Isn't that what I had on my elbow? From the photos Patch advised I get a new bed. It worked!  :lol:

Well, all I can say is if anyone notices something like this on their pooch, GET IT TO THE VET NOW.

Even if it is tiny.

We booked an appointment in no hurry, so it was a week or two before she was seen, and the lump was a reasonable size when we noticed it.

The vet immediately booked her in for surgery, which was two weeks.

By this time it was, HUGE, smelling, and horrid.

She had surgery today and the lump is going for a biopsy.

It may be malignant, which will be a blow, and we won't know for a while.

She currently has a blue bandage thing with tractors on it, on her foot.

Whilst Manky Mut Jnr, had "the snip" today, so she ain't having any Jackawowa cross anything puppies!

So we have two subdued mutts, and one who is like, ha ha ha!

SW - sorry I missed this. I don't like the look of that. Hairless and red are bad signs.

Let me know what the results say

Not a worry Patch, I realised that you would have commented if you had noticed.

She's sorted now, all we can do is hope for malignant.

She has lost her dew claw on that leg, as the vet had to borrow bits to cover the wound!

The vet is more worried about Jnr, due to the spaying, as it is a more major operation, and probably legitimately so.

However, we are more worried about the long term prognosis of Snr.

Plus spaying is almost conveyor belt now for vets I suspect, especially where we are, due to the mix of animals.

I bet the Mankies vet ain't worked on a cow since he's had his practice here.

He's from SA funnily enough, and if you watch the TV it seems UK vets go there to "do" big game!!!

Did you have your hand up its butt?

PS hope your dogs recover quickly Sidey, we got our Vizsla spayed at 6 years old last year and she was neither up nor down, all that worry!

Fantastic dog, easily the best dog I have had for temperament, character, health and fitness, does require 2 hours good off lead exercise every day and we did get soaked in the storm yesterday but that is all part of the joy of owning one.

Yesterday we had the lab results back, not malignent, that is benign I believe, so just some stupid odd growth.

She has a horrible wound on her lower leg, not much skin and flesh to cover the lump as it was so big, so, she has had to loose her dew claw for the vet to use the resources to rebuild the skin around the region of the lump.

She was a bit rough the night she had the op, just subdued really would be a better description though I think.

Just recovering from the anesthetic I think.

She has been fine since, wound is healing well the surgery says, she's been back just about every other day since the op, not because she had to, but she needed to because the dressings kept coming off her leg over the wound!

She has to wear a baggie (a bag over her bandage to keep it dry when she goes outside, so that the wound is kept dry).

Doing fine, back to the Vet in the morning early, to see if she can go without a dressing, but might end up with a cone of shame!

That won't stop her 2 kennel mates having a go at the wound though.

For us, a dressing would be better for another few days tbh.

It would be easier to manage her, the 3 of them are mental around the house and garden, they have a good time playing all day every day with each other, in and out of the house.

She is playing just as had now barely a week after the surgery, mind she was the day after!

So, it's not bothering her really.

She has had some laser treatment on the wound. Patch?

We will know more tomorrow, we realise that the uncovering of the wound will promote healing, but, how we are going to manage the access from the other 2 might be an issue.

It seems wrong to seperate them so that they can't play and intact together as they have grown up together.

Picture for those who are not easily upset!

It was taken a day or so after the op, when she removed her first dressing! 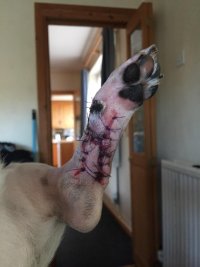 So pleased pouch is on the mend, that is some stitch work there.

Thanks for the update, dogs just become so much part of the family


Sidewinder said:
She has had some laser treatment on the wound. Patch?
Click to expand...

I think a triumph of marketing over science, but some people seem keen. The reps claim it may help heeling.

Wondering How Long This Fault-In-Waiting, has been on the pending file?