Why Do My Batteries Go Flat?

I have a Canon Powershot Digital Camera. It uses AA batteries, an excellent feature, and I use rechargeables. I keep four recharged batteries on hand all the time in a little plastic box made for carrying such batteries.

The box fits in my camera case.

But it is not a mistake. They've flattened during their time in the plastic box.

Is there some problem with keeping batteries in such a container? Can they lose their charge somehow because of the plastic?

I've attached a pic of the plastic box in question. 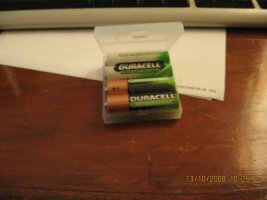 I have a Canon Powershot Digital Camera. It uses AA batteries, an excellent feature, and I use rechargeables. I keep four recharged batteries on hand all the time in a little plastic box made for carrying such batteries.The box fits in my camera case.

But it is not a mistake. They've flattened during their time in the plastic box.

Is there some problem with keeping batteries in such a container? Can they lose their charge somehow because of the plastic?

I've attached a pic of the plastic box in question.

I don't think the plastic enclosure will be having any adverse affect?

Are you aware that rechargeable batteries have "current" rating as well as the voltage &amp; size..

the "mah" milli-amper-hours bit it the amount of current it can supply over a length of time...

some equipment use more juice than other..

are you batteries of a suitable "mah" rating?

does your camera instruction suggest any particular size?

Also could be problems with your re-charging?

some batteries don't like being continually recharged without being very near discharged first?

i.e. get problems if continually recharging from only half discharged.

NOT the carrying container.

Thanks for your input.

I'm using three different kinds of battery. They are all 'Duracell' batteries.

My charger is an eveready charger model EVVC which charges at 2.8V 170mA-200mA charging two batteries at a time.

Seems to be under rated for the two of the battery types I've got but it seems to handle them okay though. I've got recharged 2650's in the camera right now.

The camera specs don't seem to care about which AA's you use.

I recharge only after they've failed in the camera - so I guess it is possible that the camera has failed them after not sucking enough juice out of them. Arguing against that is the fact that recharging them and then trying them will see them apparently work okay and for the longest time, and shooting video which is the hardest task for the camera.

I don't know how to test the batteries during their time 'in waiting' in the plastic box. I have a cheap digital multimeter - would it be sensitive enough to measure them in some way or other that would indicate if they're losing charge or not? It has a current measuring function, just barely, if I remember right from when I got it and read the instructions you can only use it for a couple of seconds or something.

I have heard - talking car batteries - that merely measuring voltage isn't at all good enough. That a battery can tell a multimeter that it has sufficient volts on hand only to fail to be able to deliver sufficient current when a load is applied. I don't know how true that is and I don't know (if true) if it applies to these tiny AA batteries.

There are vague memories of static electricity tricks with plastic combs and rubbing on cloth. This plastic box sits inside a cloth camera case. I tentatively surmised it to be just possible that some kind of static electricity thing was happening that could somehow or other drain the charge from the batteries. But, of course, that was all wild speculation born of my ignorance. It is what caused me to post here.

I'm now quite ready to believe the problem lies somewhere in my charging or whatever but if anyone has any other theories I'd like to hear them.

Static electricity is different! Electrons are lost from an insulator and the crack you feel is the brief movemnt of electrons. Certian things lose electrons and take a negative charge and others take a positive charge - this explains the ability to 'stick' a balloon to the ceiling! For simplicity's sake assume static electricity not involved.

I had an old Vivitar camer that would only take 15-20 pics on 2 rechargable 2000mah batteries, I now have a Konika Minolta with a Li-ion battery which takes hundreds. Camera's tend to be high drain devices - especially if using flashes etc.

How long are you keeping the batteries in the box after charging? Rechargable batteries do loose charge whilst stored (li-ion loses less charge in storage).

You could try buying 2 identical sets of non-rechargable batteries store 1 in the case and keep one as a control - rule out the box? (although the box is really unlikely to be involved)

Or try a new set of rechargable batteries? How old are they?

NI-MH should be charged when part drained they can be harmed by letting them go totally flat. NI-CD batteries should be totally flat before recharging if you charge them when they are half charged they loose the memory and are damaged. I am not sure about the li-on ones. You need high powered batteries for cameras as they take a lot of load. As Apache says they will lose power when not used.

Location
In the office again.

The "memory" isn`t something they lose - it`s more like:

You use 80% of the batt life. Your camera / mp3 / whatever, tells you the batts are getting low. You charge them.

This cycle is repeated a few times. The battery, in effect, "forgets" about the 20% you never use - and will go flat at 80%. This is the "memory" effect, which is why they should be completely discharged before charging.

Some of the better chargers on the market do this automatically.

or 500ma for 5 hours.Guiness Drink

Check this link for more information about testing. Also look in the Specifications tab.

This is the charger I am using. I was able to recover some batteries that would not charge with a standard type charger. If you use an electronic charger often or have many batteries they are worth the price.

It will charge the first - but Wont fully charge the 2nd and rd ones.

This happened to me before. I had to buy a new charger.

Welcome to the forum Sherlock Holmes. All the way from the UK.

It's good to have you onboard, Sir.

You must log in or register to reply here.

P
Absolute blinder of a job